The Weather in Kenya

See also the full up-to-date weather map, below!
​The weather in Kenya is generally sunny all year round. But there are two main rainy seasons. Lasting from  March until May (the ‘long rains’) and from November to December (the ‘short rains’).

​The climate of Kenya varies by location, from mostly cool every day, to always warm/hot. The climate along the coast is tropical. This means rainfall and temperatures are higher throughout the year. At the coastal cities, Mombasa, Lamu and Malindi, the air changes from cool to hot, almost every day. 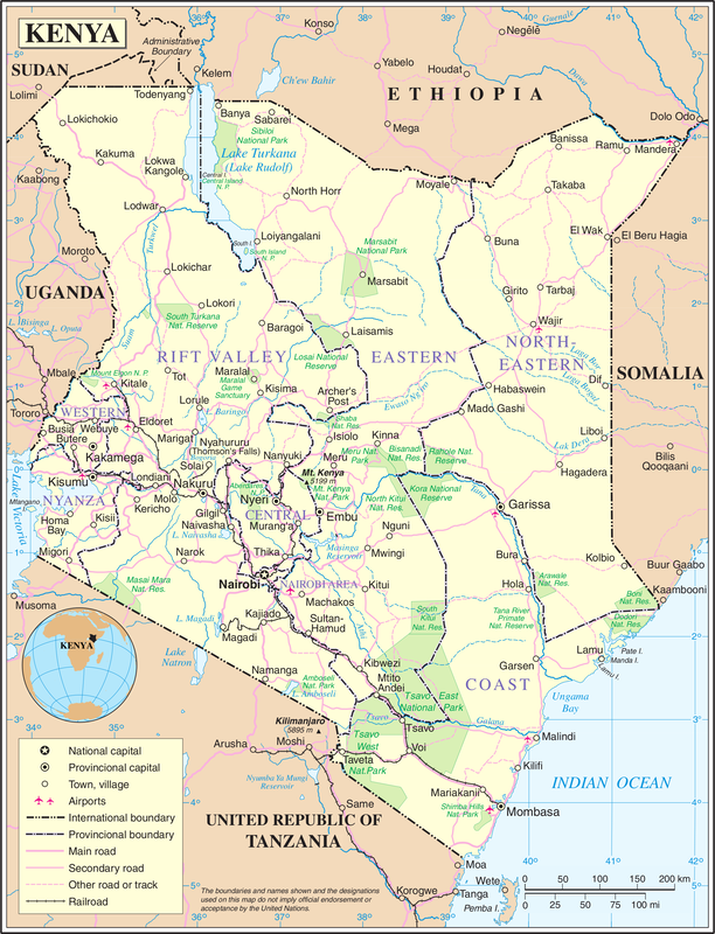 United Nations Map of Kenya
​Central and Western Kenya is characterised by the Kenyan Rift Valley and central province home to the highest mountain, Mount Kenya and Mount Elgon on the border between Kenya and Uganda. Central Kenya is located on a plateau and the altitude keeps the heat index at a comfortable level. Nairobi, the capital of Kenya is situated in this region and average temperatures here vary from a minimum of 10°C to a maximum of 28°C.

The Kakamega Forest in western Kenya is a relic of an East African rainforest. Much bigger is Mau Forest, the largest forest complex in East Africa. Western Kenya is generally hot and humid with rainfall falling throughout the year, the heaviest usually in April. There is abundant sunshine year round and the rain mostly falls in the evenings. Temperatures range from a minimum of 14°C to a maximum of 36°C throughout the year.

The temperatures in Mombasa remain quiet hot for most of the year, but on you will find it very acceptable, due to the ocean breeze. The same conditions, you will find in other coastal towns such as Malindi and Lamu. The average sea temperature is usually around 26°C, and the conditions for swimming are excellent.
​Western Kenya - Witness the famous annual great wildebeest migration between July and October at  the Masai Mara National Reserve, in Western Kenya. Abundance of wildlife and spectacular landscapes.
Generally sunny all year, are the bushlands of northern and eastern Kenya. The temperatures are up to 40°C during the day, and less than 20°C during night time.
Rainfall does occur, but often in the form of a violent storm. July is usually the driest month, and November the wettest.  Northern Kenya is full of natural, rugged beauty, an area where you hardly find people around. 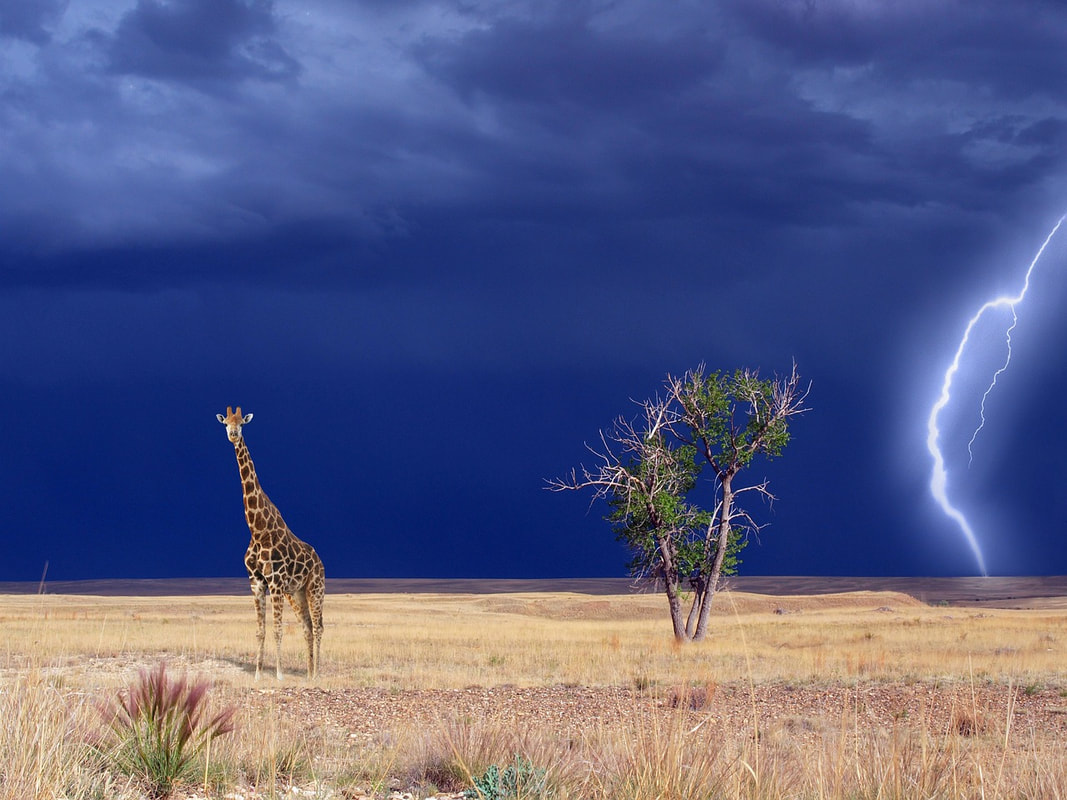 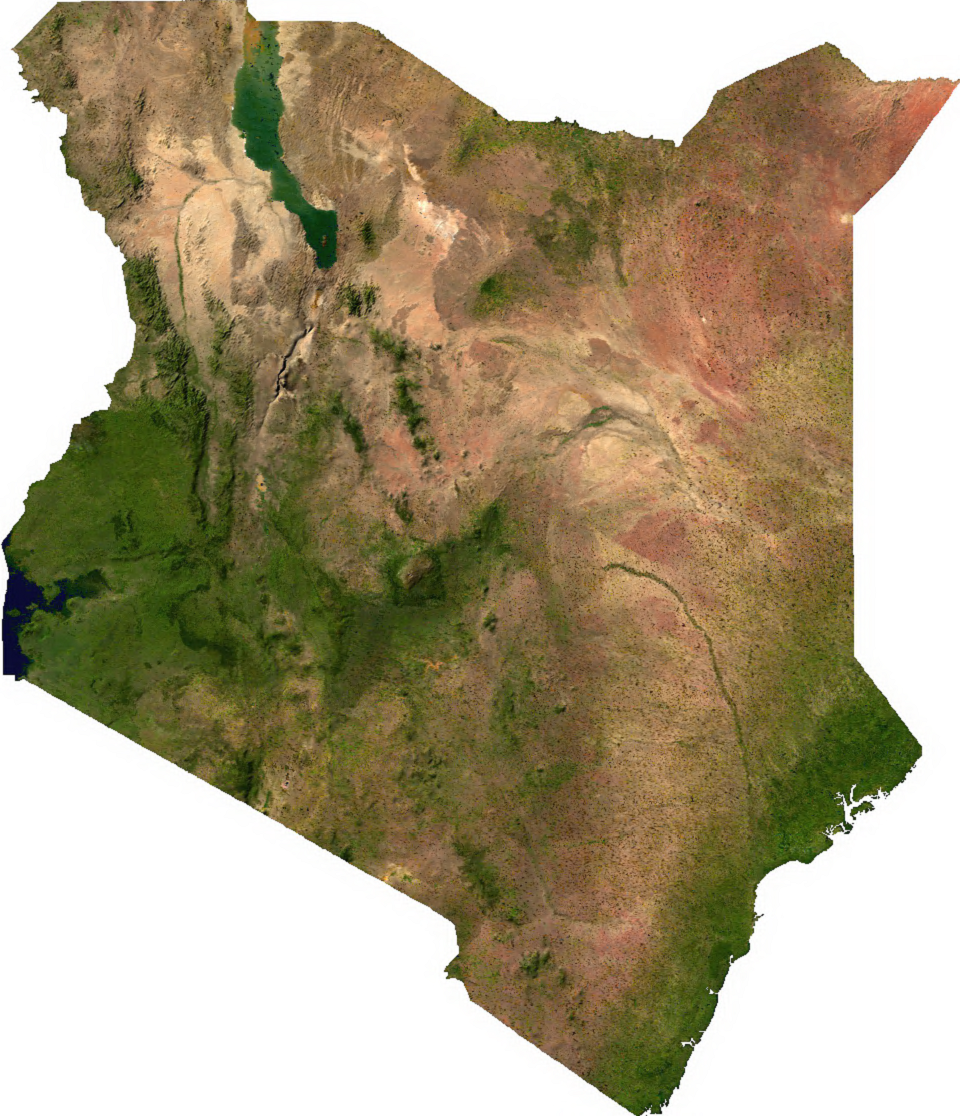 Kenya - satelite image
​​Snow in Kenya - Yes, Mount Kenya has permanent snow at its peaks, and cold to freezing all year round.  Night temperatures, in higher elevations, can drop even as low as -10 C. The early mornings on the mountain are usually sunny and dry. Clouds often form around midday.

Our advice would be to have always some warmer clothing with you. Also a small pocked torch light is usefull.
​​HOME   KENYA NEWS   NATIONAL PARKS  KENYA RADIO   ABOUT KENYA     HISTORY OF KENYA